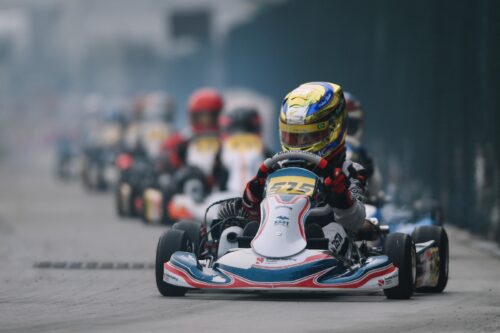 A) WHEN DID YOU START YOUR KARTING CAREER?
My father gave me an electric kart when I was two and we used to drive every weekend in front of our house in the Marina. By the time I was three, I had a real Go Kart and we went to the local track every weekend. I never looked back.

B) WHAT DO YOU THINK ABOUT THE KARTING LEVEL IN EUROPE?
It’s simply the best in the world. Last year we raced our first race in Europe. I was still nine and I remember there being 100 kids. I thought I could do well, and my father said how we were there to make it to the final. If we managed to do that, it would’ve been impressive. I remember thinking he was crazy and that I needed to do better than that, but he was right. I ended up qualifying for my first final on my first attempt. I was P22 in Sarno and it was one of the best moments of my life. After that weekend I kept telling Papi that one race in Italy was like 10 in USA, and that I wanted to come back. That’s how racing in Europe started and again, I never looked back. Even though the distance, money and time away from school and my father’s time away from work make it really difficult, it’s where you need to be if you want to make it in this sport in Europe.

C) TELL US ABUT YOUR 2019 RACING SEASON?
My racing season has been a strong one. In 2018, when I first raced in Europe, I raced with AV Parolin, but my races didn’t really go as planned. That’s when we decided to race with Team Driver (Kart Republic). My goal was to learn from the top drivers on the team and run top 10. I think we accomplished that apart from a few off weekends. The highlight of my season was winning the rookie championship with three race wins and one third place finish, especially after having missed one race. I am really proud of this accomplishment.

D) WHO HAS BEEN YOUR TOUGHEST RIVAL THROUGHOUT THE SEASON?
I’ve had a few, but the ones I can fairly compare myself to are William Macintyre and Joel Bergstrom. They are my teammates, and I have learned so much from the both of them. There were times I matched them in speed, but what I lacked was the racing experience. I have been working really hard since then on my race pace. William and Joel are not only my friends, but drivers I really look up to.

E) WHAT’S YOUR PLAN FOR THE 2020 SEASON?
I’m very excited for my 2020 season. We will be racing even more in Europe. Hopefully by the beginning of this season, we can announce our very exciting plans for 2021. My goal will be to win more races and hopefully become a world champion.

F) WHICH IS YOUR FAVORITE TRACK?

I have a few, but if I had to choose one, it would be South Garda Karting, the temple of the karting world.

G) WHO IS YOUR RACING HERO?

Ayrton Senna. He’s a Brazilian racing hero and someone l’ve always idolized. My helmet is modeled after his, but instead of the bright yellow, mine is bright gold. Aside from Senna, the racer I grew up watching and cheering for is Sebastian Vettel. He drives for my favorite team, Ferrari, and has my same racing number. I chose #5 because of him, and I’ve carried it with me since I’ve begun racing.